When you need him.

I dare say that, in today’s America, he wouldn’t be going after just thugs.

That We Are Approaching A Global Economic Meltdown

A good article from the Daily Sheeple.  Current information.

The Kenyan Regime is now abandoning the last ally we have in the Middle East.

Lurch, the U.S. liar, glorious Vietnam vet, and SOS is now threatening Israel with a cut-off of aid and an International boycott if it doesn’t cave into our Muslim President’s demands to accept a peace deal with animals that only want to kill them.  Israel doesn’t have a choice now.

Look for war soon.  Hopefully Israel will begin with Tehran or Holland.

If our military (what is left of it) doesn’t move now to take down the radicals in office and complicit bureaucrats, educators, left-wing activists, and RINO’s, the world might get material for its new World at War series of books.  If they don’t move now, they (Generals, Colonels, Majors, Captains) will be the next to disappear at the hands of this gangster government.  And don’t think that much of this isn’t being affected by the Central Banks and Progressives in Europe.  That’s the “International” part of this boycott.

But, of course, we will step up our aid to Karzai (who just released killers with blood on their hands), Libya, and Iraq.  Iran just got its first installment of released monies, and we’ll soon be sending them your tax money too.  You can count on it.  We may have to sell off Yellowstone to the Chinese to do this, and they might use it for a military base, but then, you should just shut your mouth and get back to work.   Else this Government might decide to boycott your ass.

Government has been busy spending billions of our tax dollars over a game that is no longer what the inventors designed, where the only game is keeping women pleased, and children occupied, for three hours.  Unless one goes to a big building (built by taxpayer in most cases) to watch grown men get rich, bitch, and act like circus freaks.  The only game is that of the ownership separating people from their hard earned money.

For the first time in history, our Federal Government is out (in all of its glory) to protect all of those fans.  Deploying the HSA, TSA, CIA, FBI, DEA, ATF, USAF, USMC, National Guard, Coast Guard, DIA, EPA, IRS, NSA, and every other agency known to man, this ‘game’ now serves on primary purpose.  Check that. 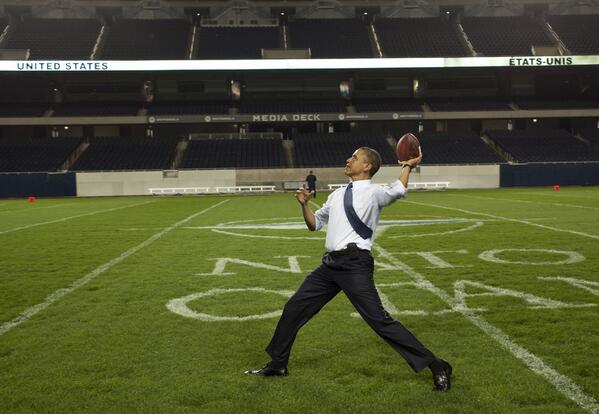 If you’re not scared that pedophile worshipping Mooslim (or white American Tea Party) terrorists (including Bin Laden) aren’t going to kill you (and eat your wife and children), then it (Government) hasn’t done its job.  More money will be required of you.

What else to we have to keep our economy going?

…and he throws a football like a little girl.

It’s a good thing that Yellen, and the Federal Reserve, can print money, because we damn sure don’t have enough out there now.

Good luck, America.  Isn’t it nice to know we have our priorities in order?